Role of Drones in Insurgency 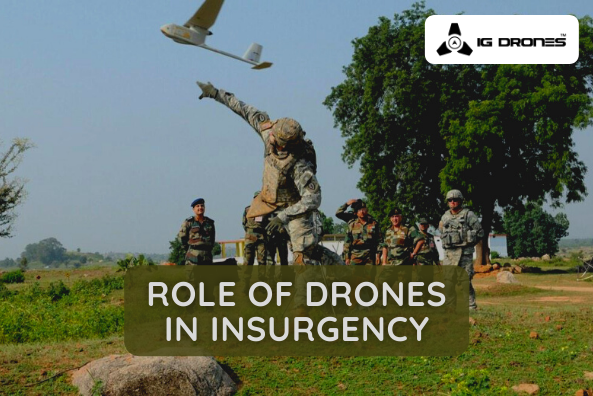 Northeast India is the most volatile and insurgency affected place in the country after Kashmir. Militants in India’s northeast once enjoyed vast popular support since they, in their formative years, voiced genuine grievances of the people such as poor governance, alienation, lack of development and an apathetic attitude from the central government in New Delhi. However, in recent years, this influence has been greatly reduced. The Indian government has had some success in achieving stability in the region, using tactics from negotiations to military operations to root out militants. Nevertheless, the region remains a potential tinderbox.

Insurgency always leads to undesirable consequences. From stone-pelting to bloodshed, it leaves no stones unturned in making lives miserable for the common men. Thus, preventing them or taking appropriate measures against the insurgent groups is mandatory.

Unmanned Aerial Vehicles a.k.a. Drones can be successfully used in such counter-insurgency operations. With the help of their high-resolution camera, multiple zoom-in capability and extended endurance can offer a clearer view of the situation to the ground officials in real-time. This in turn can help them distinguish between civilians and combatants in an elaborate manner as compared to ground crew and manned helicopters.

Bloodshed, disturbances and casualties are very common during an insurgency. Drones have proven to be life-saving tools during such critical situations.

IG Drones can be due to their high endurance, wide range and ability to fly beyond human auditory and visual capacity can be used to capture on ground images of the situation, hence providing the officials with an ideal picture to act upon. In case of casualties, it can supply medicines for first aid till the situation comes under control. Just like during natural disasters, IG Drones can help to locate the common public under distress and encourage the authorities to carry out rescue operations, saving thousands of lives. Our Delta 400 drone has also played a huge role in delivering COVID 19 vaccines in remote areas of the nation, hence protecting the lives of many.

Drones, when combined with human intelligence, can also be effective in locating and targeting known terrorist operatives. They can be employed with comparatively lower risk to life unlike piloted aircraft or ground forces as well as for limiting terrorist capabilities and reducing collateral damage.

"At least one squadron of UAVs would be deployed by the year-end in the Northeast. The aircraft, called 'bird' by the force, can survey up to 250 km from its station. Sensors and cameras fitted to the aircraft can detect developments and movements on the ground. It would be handy in the deep jungles of Arunachal Pradesh and other inaccessible areas"

Drones have the ability to instantly provide precious operational information about the battlefield that helps to enhance situational awareness and target damage assessment. They are also capable of hovering over a target, watching it continuously in remote and difficult areas, saving precious human life.

Drone warfare is one of the most important combat-strategy developments of this century. The employment of unmanned aerial vehicles (UAVs) or drones is a revolution in the making. It is proliferating rapidly and will surely become even more potent in the coming years, causing major developments in the field of combating insurgency.

Read our article on The Drone Laws 2021