In the 21st century, it’s indisputable that we are all dependent on technology for our survival. While technological advancements have been regarded as both a boon and a bane to the society, let me throw some light on one of the biggest boons of technology- THE DRONES and how it is revolutionizing the Railway Industry.

With each passing day, the use of drones in business is significantly increasing especially in the Railway industry. They have been providing the industries with efficient and practical solutions to the problems that commonly arise in that field. Wondering what benefits a little device as a drone could possibly serve. Come on! Feed your curiosity with the super informative article below.

Every constructional process has to undergo certain stages before it becomes an architectural wonder.  So do the railways.

Before initiating any sort of construction activities, it is important to have an idea about the suitability of the landforms. Conventionally, this process was carried out manually which was not only time consuming but also equally expensive. That’s when the IG Drones come handy. Our drones skillfully inspect the potential land for the construction of new railway tracks. With their aerial monitoring services and experienced drone pilots can easily assess the lands, these drones collect data and provide a detailed report in a fraction of the time at costs much lower than the conventional methods. 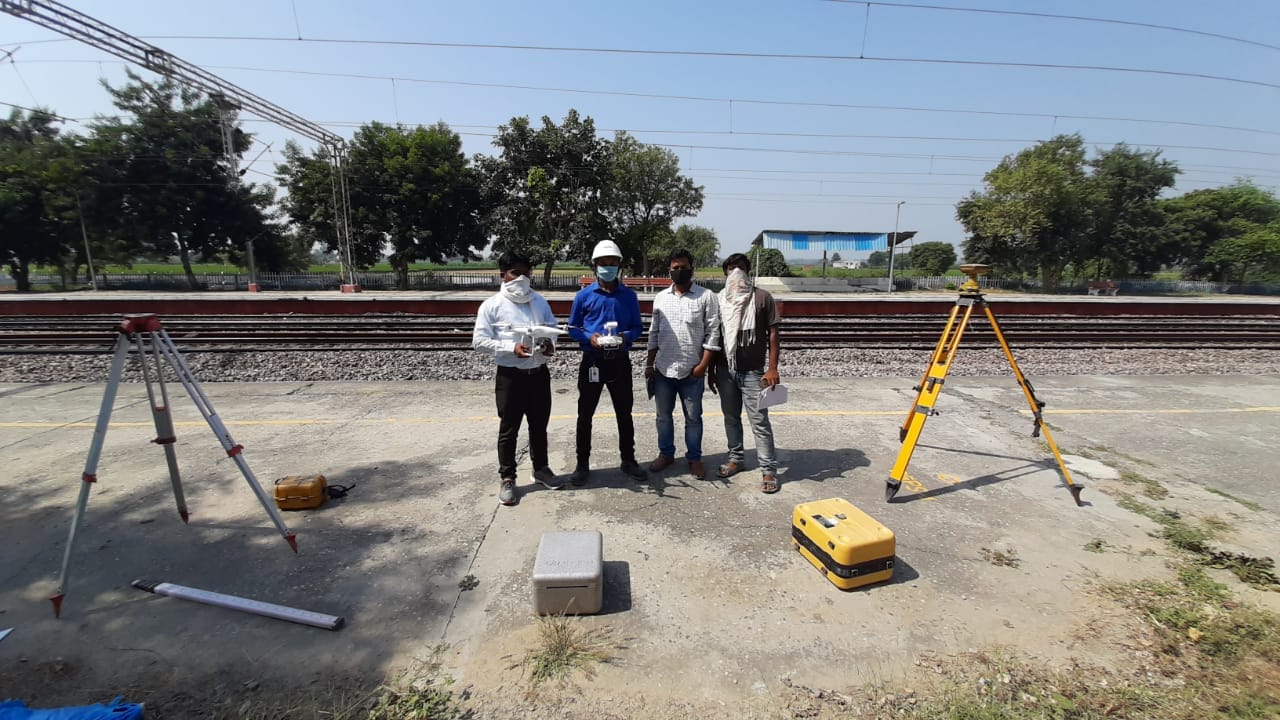 Team IG in action for a Railway Survey

Guess what! The land got approved and the new project gets a green signal. But that’s not where it ends, does it? That’s where the real work starts. Once the project begins, it becomes essential to keep a record of its progress. Moreover, this stage plays a significant role in controlling the budget of the project.  Though a project manager is appointed to take care of it, but is it really possible for one person or a team of experts to carry out this process regularly? The answer would be NO. So in order to maintain the regularity of the inspection process, the railway industry has now started shifting its focus to drones.

Speaking of drones, what can be better than the IG Drones? Through IG Drones monitoring solution, the project managers can keep a track of the overall progress on a daily basis without even having to visit the construction sites regularly. Besides, by giving proper instructions and applying effective strategies, the overall construction time can be reduced significantly. Lesser the time invested lesser the cost! So in this way, the overall budget of the project can be also reduced.

The IG Drones are regulated by a team of skilled drone pilots are always present who keep a look on all dimensions of railways plans while maintaining all the safety standards. Once the data gets collected, in form of aerial videos or high resolution pictures, out team prepares a detailed report enumerating the developments in the project and highlighting critical information from partially constructed tracks to unfinished pillars.

Keeping a check on the progress of the project is NEVER ENOUGH! If you really want to reduce the budget, you got to have a look at the assets too. Yes, you guessed it right! I am intending towards Stockpile monitoring i.e. keeping an intricate record of all assets and resources while the construction is going on. But again, doing it physically not only requires manual labour but is also time consuming. So once again, Drones to the RESCUE!

Our drones enable the railway project inspectors to regularly monitor the onsite stock materials during construction and boost the efficiency of projects financially and save a significant amount of time as well. Our proficient drone pilots with their detailed data collection from numerous topographic data points for sound and reliable management to carry out the assets management process effectively.

Aerial view of a Railway Track captured by IG Drone

Finally! The tracks have been constructed. The task is done, but still, there is a long way to go before the project becomes a success. You must have read about the derailing of trains leading to huge accidents in the tabloids or heard about it in news. While one might think it is caused due to some underlying defect during construction, but the actual reason behind such accidents is LACK OF MAINTAINANCE. Even after the tracks have been constructed and been in use for long, in order to avoid any fatal incidents, regular inspection and proper maintenance of the tracks is mandatory.  Once again, the question arises, how are we going to ensure regularity in the inspection process?

Moreover, it’s not necessary that the railway tracks will always be constructed in the plains. The landforms might include plateaus, mountains, over a water body or other hard to reach places, depending on the needs of the public. Hence, it is not possible for the inspectors to carry out the regular inspection at such sites as the hazards during travel or ongoing inspection process cannot be completely ignored. Also, putting life in risk despite having such developed technologies is clearly not justified. Hence, aerial inspection by the help of drones is the ideal solution.

Drones can travel miles, inspect even the smallest components of the railway tracks and bridges such as rusting, loosened ball and bearings etc and present a detailed report for the initiation of the maintenance work.  With the help of IG Drones’ latest imaging and videography technology, our experts produce multiple 3D models and high resolution images to secure the structural integrity of the tracks and bridges both internally and externally. Images procured through track inspection, thermal inspection, structural inspection, etc. is used to detect possible dangers, and repair the existing problems to prevent any catastrophic damages in future in a very short span of time. Our approach to every situation is always quite simple, holistic and well-controlled. Above everything else, our ultimate goal is to help people and alleviate their problems.

As IG Drones takes another step towards normalizing the use of drones to carry out several important works in the railway industry, we feel really satisfied to see the purpose behind creating IG Drones finally being served.